Stressed Out? The Dangers Of High Cortisol And Stress

Are you stressed out? The dangers of high cortisol and stress could kill you. Emotional stress is linked to the top six causes of death in the United States including cancer, coronary heart disease, accidental injuries, respiratory disorders, cirrhosis of the liver and suicide according to a study which also found that men who lived with chronic stress were more likely to be diagnosed with prostate cancer and women who live stressful lives were more likely to develop breast cancer.

Here at LetsGetChecked, we wanted to uncover the biggest causes of stress in younger people as prevention is the best cure and knowing your health prevents a myriad of illnesses later in life.

Our at-home test can measure adrenal performance or stress with online results in 5 days.

Stress is defined by the American Psychological Association as “a feeling of being overwhelmed, worried or run-down.” The factors that cause stress are known as stressors. Stressors can be external factors such as your family, friends and finances or internal factors such as a genetic predisposition to depressive and anxious states.

What Are The Symptoms of Stress?

Stress is a physical and psychological condition. It’s a reaction to a threat that we feel we cannot control. Hormones are released to equip the body with resources to fight the perceived threat. These include a release of glucose from the liver to provide energy stores, an increased heart rate, lung dilation and increased breathing, and a decrease in digestive activity.

Are you too nervous to eat before an exam? Or do you eat a lot when you're stressed? Either way, it is a behavioural response to what you may be feeling internally.

What Does Stress Do?

Cortisol is a steroid hormone and is released by the adrenal gland in response to stress or low blood glucose. It is known as the “stress hormone.” It is responsible for controlling the body’s blood sugar levels, regulating metabolism, acting as an anti-inflammatory, influencing memory formation, controlling salt and water balance, influencing blood pressure and foetal development. Cortisol balance is essential for human health and problems may arise if the adrenal gland releases too much or too little cortisol. Cortisol levels can become imbalanced during the different stages of adrenal fatigue.

Stress is further fuelled by adrenaline and norepinephrine. Adrenal causes the “fight or flight” physical response in humans, its functions include pupil dilation to enhance vision, increased blood pressure to distribute enough blood to muscles all over the body and expanding air passages in the lungs. Norepinephrine is the neurotransmitter that mobilizes the mind and body for action. Its levels are lowest during sleep and highest during a time where one feels they are in danger or under threat. Norepinephrine increases vigilance, memory function and ability to retain data.

If you are living with chronic stress. Your body may begin to produce excess amounts of cortisol and this can negatively impact on both physical and emotional well-being.

Effects Of High Cortisol In The Body

Cushing’s Disease is a serious condition caused by an overproduction of cortisol. It causes hypertension (high blood pressure) which puts sufferers at a higher risk of heart disease.

Hyperglycemia is often found in people who are suffering from Diabetes Type 1 or 2. It is caused by elevated blood sugar or glucose which cortisol releases under times of high stress. Hyperglycemia can cause more serious symptoms if not treated correctly such as shortness of breath, physical weakness and coma

The overproduction of cortisol puts the body’s hormonal functions into overdrive weakening the immune system. This leaves sufferers more open to infection and disease.

The adrenal glands secrete hormones that control heart rate, blood pressure and the the way in which food is transferred into energy.  Adrenal failure causes Addison’s disease. Symptoms found in addisonian crisis include a loss of consciousness, low blood pressure and physical aches and pains.

Here at LetsGetChecked, we carried out a survey on 100 college students aged between the age 20 and 30. This period, known as emerging adulthood is marked by stress due to its transitory nature. In the survey, we asked 50 boys and 50 girls between the age of 20 and 30 how they were feeling in that moment. The options for the purpose of the study included 1) Extremely Stressed 2)Stressed 3) Worried 4) At Ease. The results showed that only 25% of students were “At Ease” in that moment. 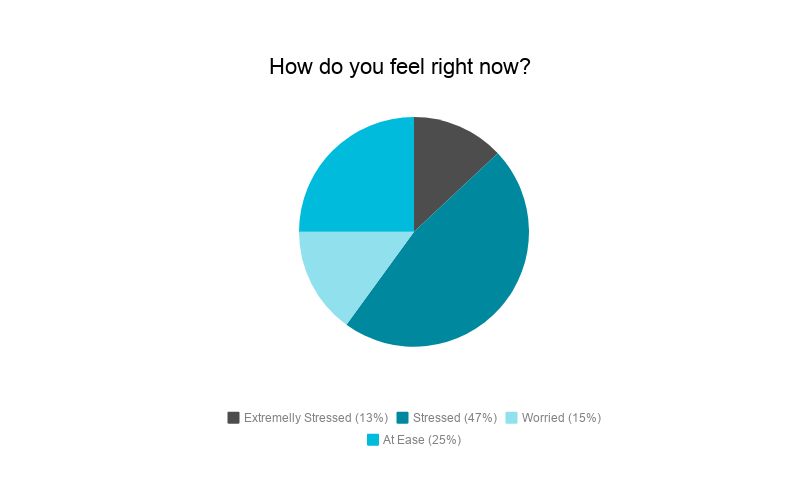 The high level of stress among this age group is compounded by the prevalence of emotional vulnerability within the  “emerging adulthood” demographic. 66% of our sample said they suffer from an emotional illness. Anxiety has the highest prevalence followed by depression and eating disorders. 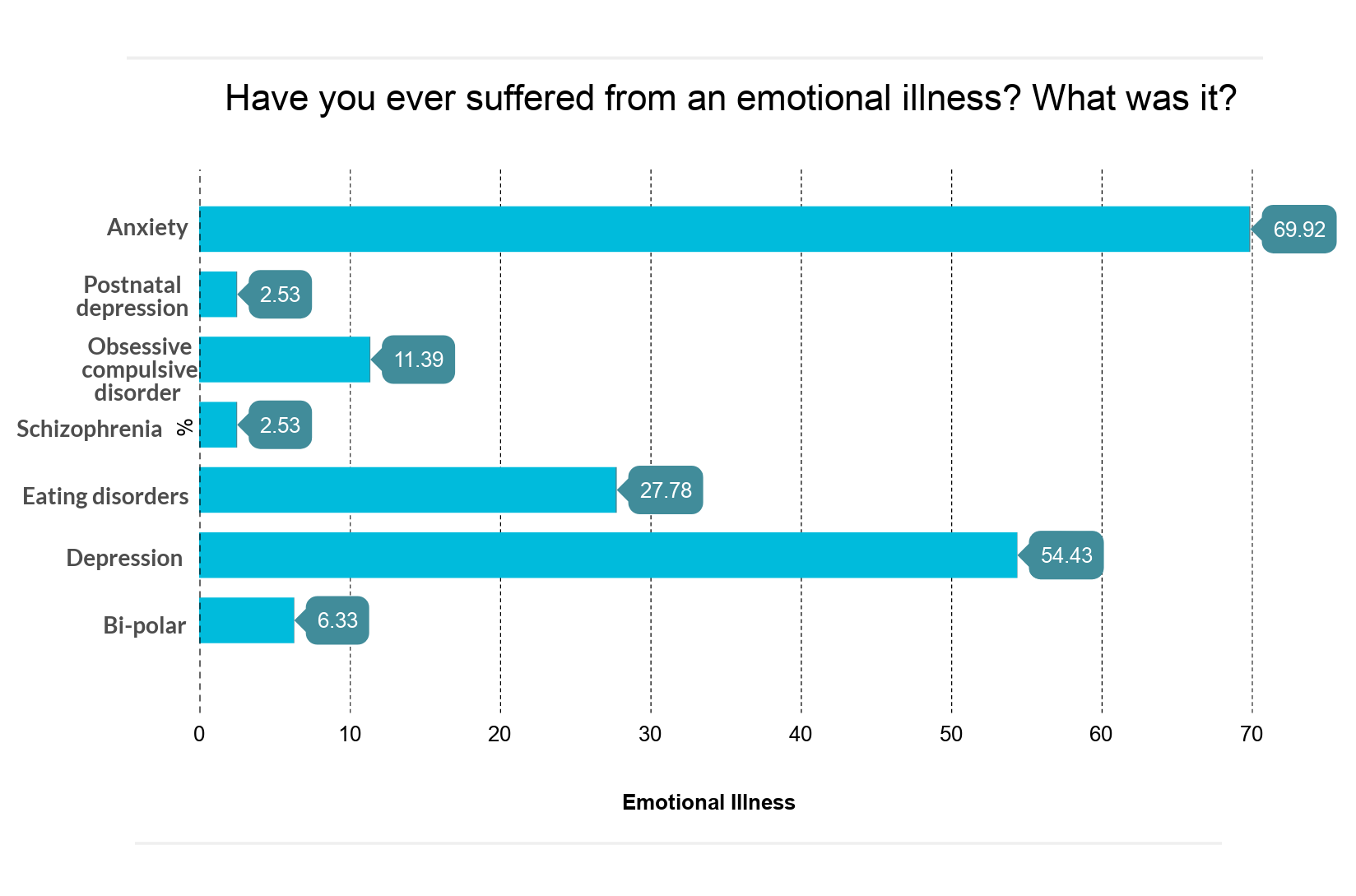 In our analysis, we found that: “Worries about the future” were the biggest causes of stress, followed by “Money issues” and “Family and friends.” 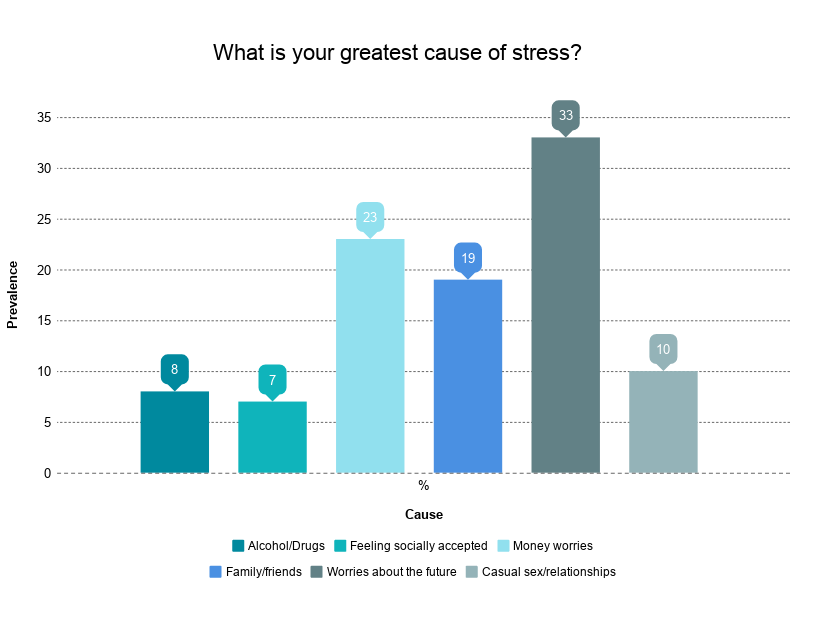 Short-term stress has been shown to boost performance in certain circumstances. However long-term chronic stress is said to exacerbate mood disorders and emotional illnesses. It also weakens the immune system and leaves sufferers more susceptible to life-threatening diseases such as heart disease.

Excessive cortisol production can occur during times of extreme stress. At LetsGetChecked, we offer a Cortisol Test. The Cortisol test is for anyone looking to measure their cortisol levels which can be linked to adrenal fatigue, low blood sugar levels, metabolic issues, type 2 diabetes and stress.

Our at-home test can measure adrenal performance or stress with online results in 5 days.

Is Your Stress Hormone Running on Overdrive?

What Does High Cortisol Feel Like? Common Signs and Symptoms

How to Reduce Your Cortisol Levels